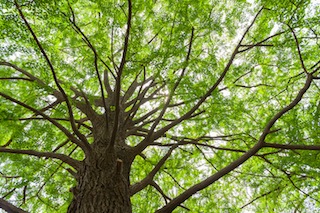 The plant, Ginkgo Biloba thrived around the world until the Ice Age reduced it to a limited area. Today, it’s known as indigenous species to China, Japan and Korea.

It was recorded, 6 Ginkgo Biloba trees survived the Hiroshima atomic bombings, was charred, and regenerated itself, and still thrive till today. If it can protect and regenerate itself, imagine what it might do for us !

Another name for the tree:     Maindenhair Tree.

As an antioxidant it quenches free radicals, especially those that are naturally produced as a result of our body functions, and monitors the levels of these free radicals to ensure they are  at healthy levels.

Some of these free radicals produced from our body functions,  are :

Other functions besides being an antioxidant :

Parts of the Ginkgo Biloba plant use for nutritional purposes:

All of these parts provide the same nutrients or flavonoids but at different levels of potency.

Generally, Ginkgo leaves are safe to consume, but Ginkgo nuts must not be consumed raw and, should be taken in moderation.

Examples of the health benefits of Ginkgo Biloba:

o   Due to its ability to dilate the arteries to allow blood flow and hence, aids blood circulation in the brain

o   In Europe, it is used to treat mental health problems caused by poor blood circulation in the brain

o Due to its ability to dilate the arteries to allow blood flow and hence, aids blood circulation.

o   Prevent over active immune response that could lead to inflammation

In France and Germany, Ginkgo is sold as prescription drug.

Home > Types of Antioxidants > Return to the Top - Ginkgo Biloba